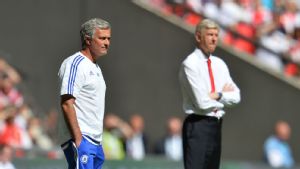 Manchester United manager Jose Mourinho has hit out at some of his critical counterparts by pointing out they will never have his issue of spending a world-record fee because they are not at one of the world’s top clubs.Mourinho had already described comments from the likes of Arsenal boss Arsene Wenger and Liverpool’s Jurgen Klopp about United’s transfer business as “unethical”, and he returned to the subject on Tuesday in an MUTV interview.Asked what he liked about new record signing Paul Pogba and what his best qualities are, Mourinho changed the topic to criticism of the deal, saying: “I like everything. I know the discussion. I understand the discussion.“I understand that, sometimes in football, these things happen and the club breaks the record but this is only possible in clubs like Man United.”Wenger had described the valuation as “completely crazy”, while Klopp said he would not spend such an amount on a single player.Mourinho continued: “When I heard some of the comments and I heard some of the managers criticising that, I don’t think they will ever have this problem because to have this problem you need to be in one of the top clubs in the world. At Man United, it can happen.”He wanted four signings and now he has them. Jose Mourinho on our latest arrival… #POGBACK Mourinho knows that expectations will be high when Pogba takes to the field, but he vowed to defend the midfielder from criticism.“If he needs protection, I am here to protect,” Mourinho said. “I know that some people think he arrives now and the first time that he touches the ball he scores, but I am here to protect him and to give him the best conditions for him to become what we think he is going to become, which is a super player for Man United, a reference for this club.”Mourinho added that Pogba has been showing that he is down to earth, explaining: “I can feel with him — immediately when I spoke with him for the first time and when he was at the training ground with people he has known since he was a kid — that he doesn’t look like a star. He looks like a kid that is back to his old school.“He is finding people that he cares about, people that love him a lot. I believe that, after a couple of days, he will feel that he never left the club. With his adaptation level, he is not a new player — he is just a kid back home again.”
Source:espn.com

About Damex MrCoded 1534 Articles
Entertainer with a difference, blogger and entrepreneur. Nigeria born Malaysian writer, am funny and I don’t flirt, quote lover. Composer of famous quote: "The goal is to be Holy, not to look Holy"