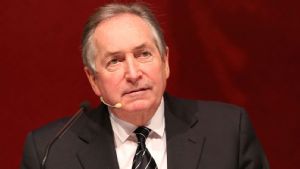 Former France and Liverpool manager Gerard Houllier has warned that Paul Pogba will find it hard to live up to his price tag and told L’Equipe that Manchester United has become “a factory” rather than a club.Pogba, 23, finally completed an £89.3 million (€105m) move from Juventus back to Manchester United in the early hours of Tuesday morning. Houllier, though, feels that there is no guarantee that the France international will be an instant hit at the club he walked out on in 2012 and that Jose Mourinho needs to offer him good support.“The sum involved in the transfer has an inhibiting side,” Houllier said. “It could become a problem depending on the personality of the player, who shouldn’t put himself under pressure in terms of that. That’s why the manager’s discourse is very important.”Houllier also believes that a player in Pogba’s position could feel he longer has the right to make mistakes in the eyes of his teammates.“But he’s not going to have €100m games every week… therefore you have to know his character,” Houllier said. “Then it depends on the club and the environment. The English want a star.“Manchester United generate impressive income. €120m over five years? That’s an instalment of €25m per season — it’s reasonable when you have a budget of over €500m. Because Man U carry out purchases or sales every transfer window of around €50m.“It’s no longer a club. It’s a factory.”Former France midfielder Olivier Dacourt thinks Pogba has the right temperament to deal with the expectation.During his own playing career Dacourt, 41, became both Lens and Leeds’ most expensive ever signing.“The difficulty is daily because you’re reminded every day in the media that you’re the biggest transfer, with your salary, especially if the team’s results don’t follow,” Dacourt told L’Equipe.
“It becomes heavy going if you’re not strong enough to overcome that… he’s young. But it seems to me that he’s able to rise to the stakes.“Paul left Manchester because [Paul] Scholes was starting and he felt he should have been doing so more often.“He imposed himself at Juve. He’s coming back through the front door. When you say that you want to be the Ballon d’Or, it’s because you believe in your potential.”